If you’re new to boxing, or you just want to clean up your form and prevent yourself from injury, then this article is for you!

I’ve taught beginners boxing for several years now, and I see the same small mistakes with almost everyone. When punching a 70-100lb bag, form is very important. Proper form and technique ensure that you don’t injure yourself, and you get the most out of your workout.

Let’s take a look at the top 5 beginner mistakes when boxing! 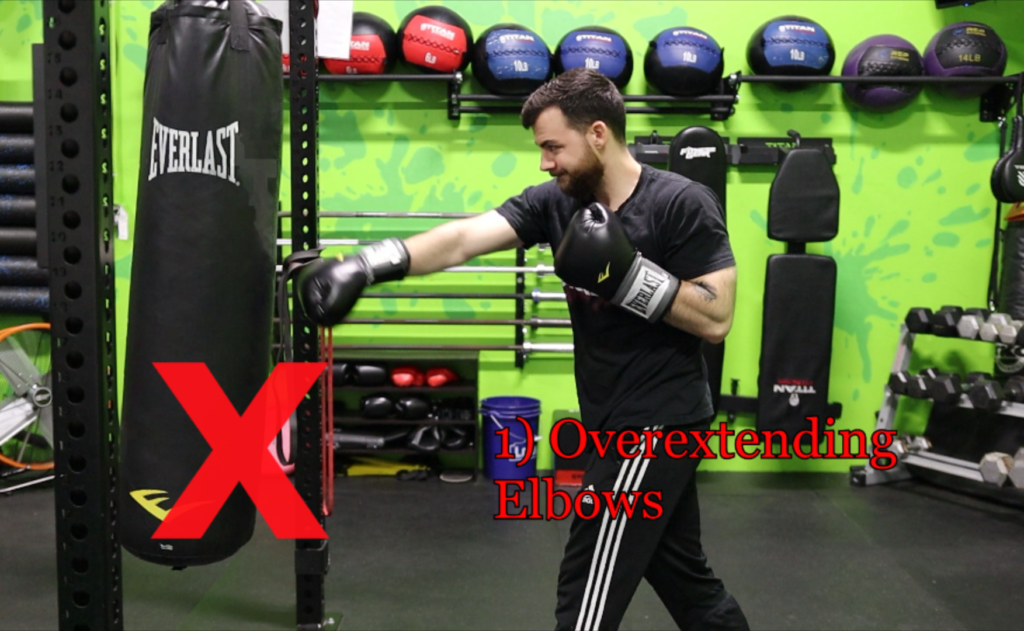 One of the leading causes of injury in boxing comes from hyperextending the elbows when throwing punches. This often comes from misjudging your distance between yourself and the bag you’re using, or just downright improper punching technique.

Always make sure you’re close enough to the bag (or opponent) so that you can hit them with a fully extended jab. Using the jab to assess distance is ideal because if you can hit the target with the extended jab, you’re at a good distance to land all the rest of the punches.

Another common issue is punching with a chopping motion rather than punching straight forwards. A good way to work on this is to imagine punching through a pipe. The punch will have to go straight forwards through the pipe to miss the sides, and will help throw straighter punches.

Make sure to fully extend your punches, as well. Failure to do this will result in far less power/force.

MISTAKE #2: NOT SNAPPING THE PUNCHES BACK AND DROPPING THE HANDS! 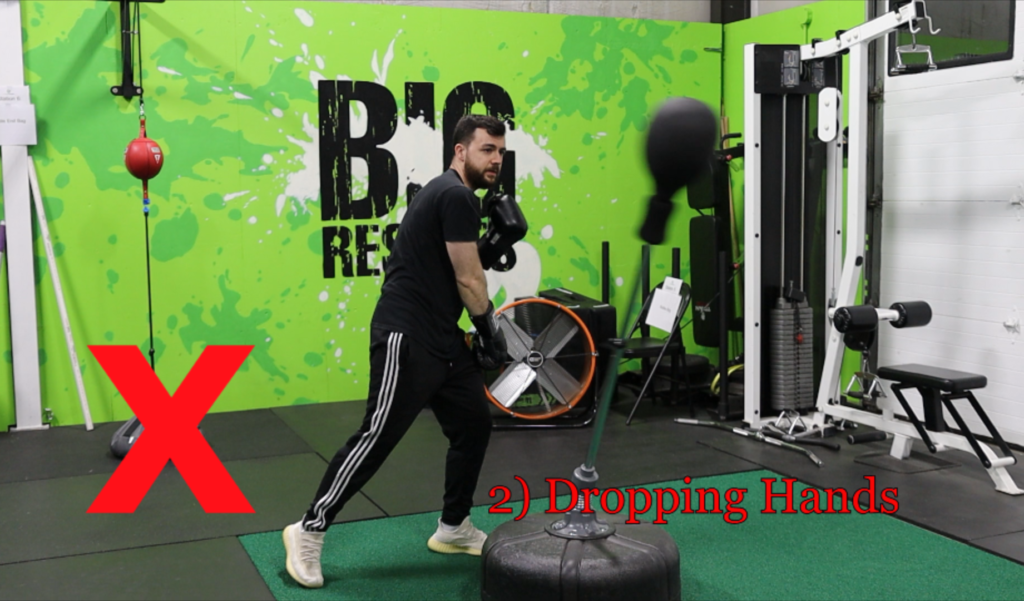 Another mistake I see all the time is throwing punches forwards, and letting them linger out in front. Every punch should be snapped back to the chin right after it’s thrown, as fast as possible. The motion is very similar to that of whipping a towel.. Throw the punch forward, and immediately snap it right back.

This increases the power of the punch, helps make your technique more efficient (getting the punches back quickly is important so you can throw them again if needed), and is also very important for defense. The longer your arm stays extended, the more time your opponent has to come in with a punch to your face/head which is vulnerable.

Always snap the punches back to the chin. Also, if your fist isn’t throwing a punch then it should be besides the chin protecting the head. Oftentimes, I see dropped fists after punches or while slipping. Never let your hands drop down and always bring them right back to that defensive position.

MISTAKE #3: NOT TURNING THE HIPS OR USING THE CORE! 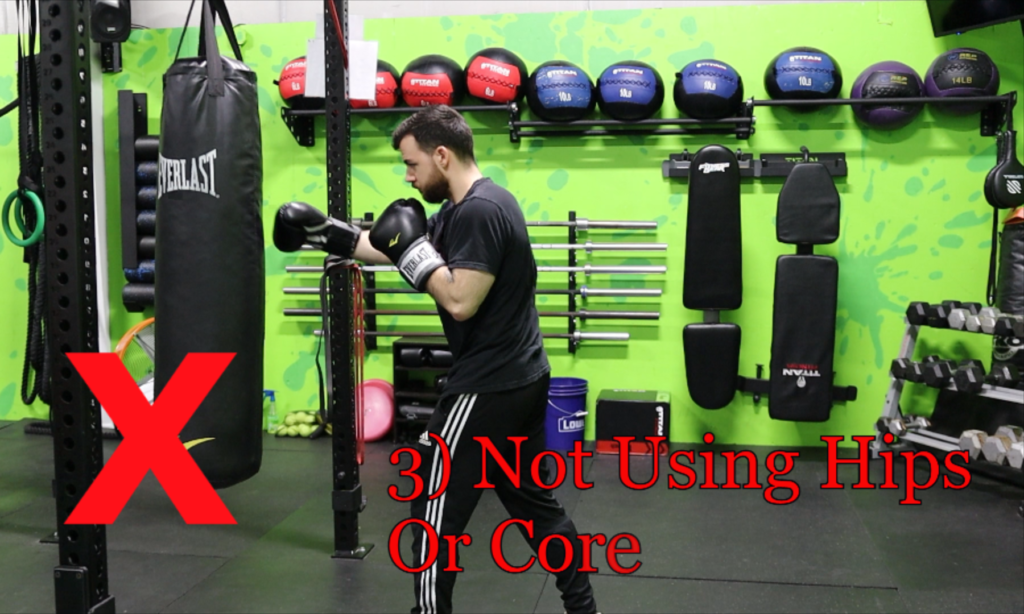 In regards to punching, the majority of your power is generated from the hips. It’s crucial to turn your hips and transfer your weight around to get a lot of power through your punches, and to have efficient technique (especially with the cross and hooks).

When you’re throwing punches, make sure to rotate through your shoulders, AND hips, as well.

This is where hooks can be awkward punches to master at first. I like to  think of your core and torso as a spring. When you’re throwing the hook you want to almost load the spring before coming back around. Load the spring by rotating slightly to the opposite direction of the punch, then use the momentum through your core rotating back to add power to the punch.

This is easier and more effective if you throw the hook after another punch that already sets you up in that position (i.e. throwing a 2, then coming back around with a 3).

MISTAKE #4: FEET CROSSING OVER WHEN MOVING AROUND! 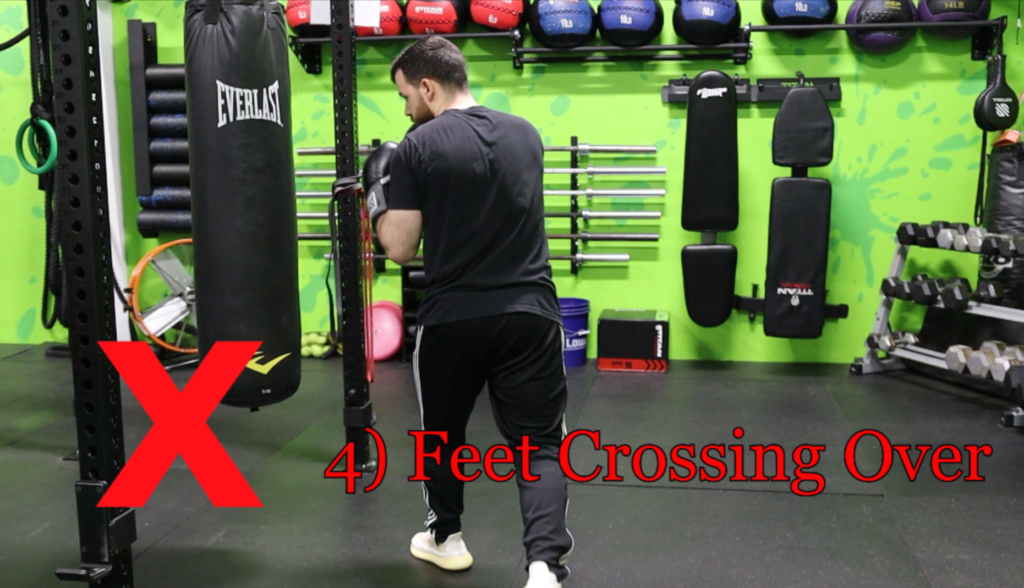 Crossing your feet over one another is never a good idea!. It throws you off balance, and makes you very easy to push over.

You should start a move to any direction with the foot that’s closest to that direction. For example, if you’re a righty and set up in an orthodox stance (left foot out in front, right in back) and you want to move to the left, start by stepping to the left with your left foot then follow with the right. 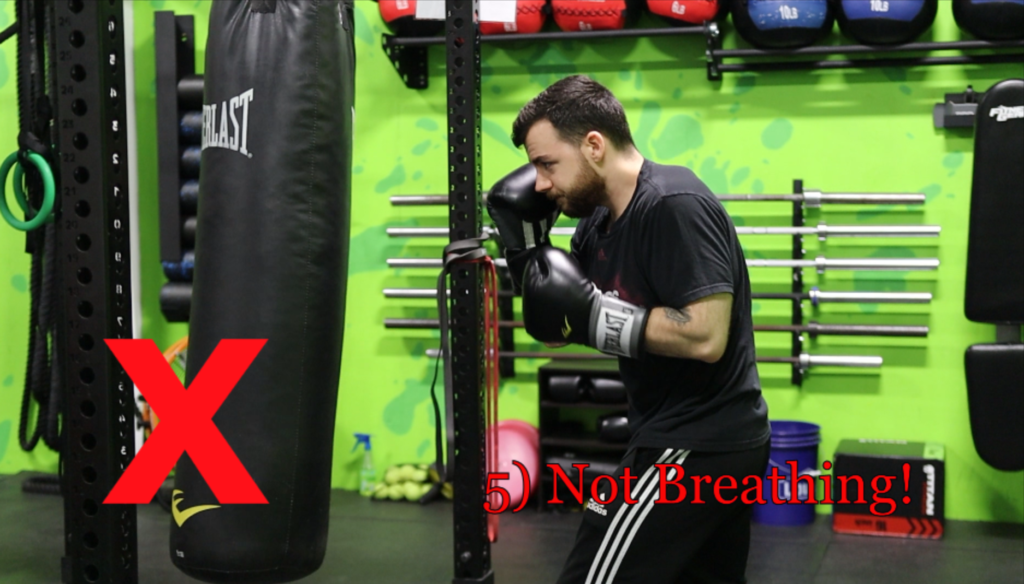 This will make you winded very quickly. Not something you want to happen in a real fight, or even in a 45 minute class where you throw a TON of punches. Conserving your energy should be one of your top priorities.. You should take quick, small breaths with EVERY punch. This way you’re constantly moving air so you don’t get tired too quickly and it also helps with adding power to the punches. You have deep core muscles that only contract when you forcibly exhale so if you want to use your core to its highest potential…. BREATHE!

Now that you’re aware of some of the top mistakes beginners make when just starting off in boxing, it’s time to get to work! Fixing these up early on is very important. If you can master these 5 key issues with boxing early on, your boxing journey will be much more rewarding.

You’ll be significantly less likely to injure yourself, and you will have the tools to develop great boxing techniques and will solidify them throughout your experience. It’s much better to master the basics early  rather than later  when you’ve practiced the incorrect way for so long that it’ll take forever to unlearn everything, then retrain. Now that you know these 5 top beginner boxing mistakes and how to correct them, practice, practice, and practice some more, and I look forward to seeing you in boxing class!!

Mike grew up as a multi-sport athlete and received his Bachelors in Kinesiology (Exercise Science) and also received his Personal Training Certification from the American Council of Sports Medicine.

Mike has worked with a wide range of ages and abilities and is an expert at working around injuries and helping those individuals reach their health goals.

In his time in college, he also worked with D1 Athletes (specifically the UMASS Amherst Men and Women’s Basketball teams) helping them get stronger, faster, and more athletic.

How To Properly Wrap Your Wrists For Boxing